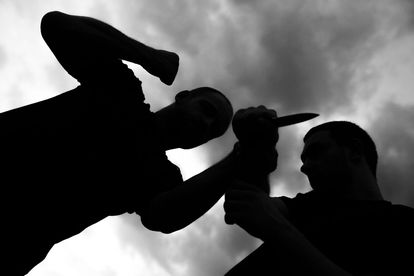 A Grade 10learner was allegedly stabbed by another learner and died.
Photo: Stock/Canva

A Grade 10learner was allegedly stabbed by another learner and died.
Photo: Stock/Canva

A Grade 6 learner from  Zama Primary School in Zastron in the Free State was allegedly stabbed  to death by a fellow pupil with a knife.

The incident reportedly happened after school on Wednesday (around 14:30) outside the school premises about 600 metres away from the school.

Free State Education spokesperson, Howard Ndaba said a brawl broke out between the boys on Wednesday at the school after the suspect who is also a Grade 6 learner allegedly bullied  and attempted to stab the now deceased learner with a spoon.

Ndaba said the suspect was instructed by the school Principal to go home and come back with a parent but instead he came back with a knife which he used to stab the deceased in the chest.

“One teacher took the victim into her car to the hospital, unfortunately the learner was certified dead.

“The suspect who had initially fled the scene was later handed over by community members to the police.”

Free State Education officials are expected to visit the school on Thursday to provide counselling  to learners, teachers and the parents of the deceased learner.

Free State Education MEC Dr Tate Makgoe condemned the violent behaviour which led to the death of a learner, allegedly at the expense of his peer just outside the school premises.

Makgoe said the School Governing Body (SGB) must investigate this incident and take necessary disciplinary action against the perpetrator.

“Our psychosocial team will support the school, family and all affected  members of the school.

“We wish to convey our deepest condolences to the family of the learner. Police are investigating the circumstances surrounding this incident.”

In March this year, a teacher at Wessel Maree Secondary School in Odendaalsrus, Free State was suspended with immediate effect after a video circulating on social media showed him violently pushing a learner.