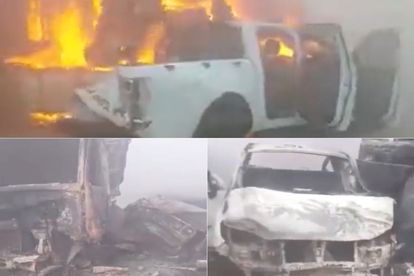 Four people were killed in a vehicle pile-up on the N12 near Witbank in Mpumalanga. Photo: @VehicleTrackerz / Twitter

Four people were killed in a vehicle pile-up on the N12 near Witbank in Mpumalanga. Photo: @VehicleTrackerz / Twitter

On the morning of Saturday, 11 June, a horrific accident on the N12 near Witbank in Mpumalanga claimed four lives. The four people who were in a sedan were reportedly burnt beyond recognition in a vehicle pile-up.

Poor visibility may have been the cause for the pile-up

The Department of Community Safety in Mpumalanga said it was suspected that the accident was caused by dense fog. The fog reportedly covered the N12 highway earlier on 11 June.

Spokesperson for the Department Moeti Mmusi said investigations into the crash are ongoing.

“The investigations into the crash has commenced. It looks like it was caused by this dense fog on that part of the road,”

Investigations into the cause of the accident are ongoing

Mmusi said the four deceased persons have not yet been identified. Spokesperson for the Road Traffic Management Corporation (RTMC) Simon Zwane also confirmed that investigations were underway. He shared that four injuries were also recorded.

The motorists were stabilised before being transported to hospitals around Emalahleni.

“There were four fatalities, all from the sedan and they burnt beyond recognition. Four injuries were recorded, (two serious and two slight),”

Around 12 vehicles were involved and the road was closed

Zwane explained that around 12 vehicles were involved in the horrific accident. This included four LDVs, two sedans, three articulated trucks and a minibus. He said the first accident occurred in an area where visibility was poor due to the extremely misty conditions.

Speaking about the road, Mmusi said it had been closed for several hours. Emergency personnel and law enforcement officers were working on the scene but the road has since been opened for traffic. He shared that the Department is concerned as there had been a number of accidents in previous weeks, reports TimesLIVE.

“We are worried that every weekend we seem to be exposed to a number of people dying on the road. The MEC is calling on motorists on the road to try to prioritise their own lives, the lives of the people they transport and the lives of other motorists so that we can try to mitigate the loss of lives on the road. Most of these crashes are out of the mistakes that drivers make,” said Mmusi.