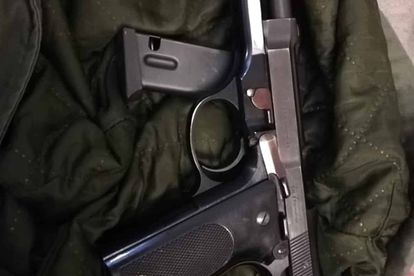 The firearm believed to have been used in the murder of a pregnant women in Manenberg.

The firearm believed to have been used in the murder of a pregnant women in Manenberg.

Four people, believed to be part of a local gang, were arrested by South Africa Police Service (SAPS) officers for murder following an intelligence-driven operation conducted by the anti-gang unit in Manenberg.

The anti-gang unit was dispatched to the area following complaints of repeated and on-going shooting incidents in the Thambo Village on the outskirts of Manenberg believed to be linked to gang activity.

While in the area, SAPS officers responded to reports of a shooting on a street in the village and that is where they found the tragic scene.

“Upon the members’ arrival on the scene they found a 26-year-old deceased woman with several gunshot wounds to her body. At the time of her death she was eight months pregnant and was a mother of two minors,” SAPS said in a statement on Facebook.

“The victim was on her way to purchase electricity with her 29-year-old male friend, who was also wounded in his left upper leg during the incident.”

During their interviews of witnesses and informants, officers were made aware of the possible whereabouts of a gun that could have been involved in the alleged murder.

“Members received information of a possible firearm at a premises in Lillian Ngoyi Street, Thambo Village,” the statement continued.

“As the information was followed up, members found one male and two females between the ages of 22 and 29 in possession of a prohibited firearm.

“The firearm was confiscated and booked in as exhibit. The firearm will be send for ballistic test to determine if it was used in the commission of crime.”

The gun and additional information received in the acquisition of the illegal firearm by police led investigators to arrest four males between the ages of 18 and 28 for the crimes of murder and attempted murder.

“Further information gathered identified the perpetrators as members of a local gang,” the SAPS statement concluded.

Manenberg is a well-known hotbed for crime to the police and residents of the Western Cape alike.

When the South African National Defence Force (SANDF) was deployed to the Western Cape to assist police in battling crime, the first area they went to was Manenberg.

The SANDF, in conjunction with the South African Police Service (SAPS), will conduct an intense three-month operation in the area, which has been plagued by rampant gang violence, senseless murder and unmitigated criminality.