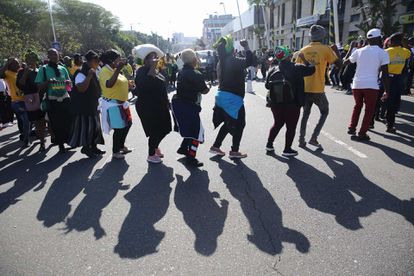 African National Congress (ANC) spokesperson for KwaZulu-Natal Ricardo Mthembu revealed the party’s provincial leadership would be meeting on Sunday 11 August 2019 to discuss the future of suspended eThekwini Mayor Zandile Gumede and other members who have been accused of breaking the law.

Promises of a decision in the Gumede matter

Mthembu promised a decision would be made in the Gumede matter at the KwaZulu-Natal special provincial executive committee (PEC) meeting, but discussions would need to be held for every case.

“As we are meeting on Sunday we will be taking decisions on each case,” he said.

“There are other comrades who are alleged to have broken the law to also be discussed.”

When pushed, Mthembu refused to speculate on decisions that might be taken on Sunday, specifically in the case of Gumede.

“That would be guessing on what the PEC is going to decide,” he chastised the gathered journalists.

“We should wait for the PEC to discuss, and from there we would know what the decisions are.”

For her part, Gumede appears to be preparing for life after mayorship of eThekwini. In her most recent address to her supporters, she pledged to protect the eThekwini municipality and make sure it does not fall into the wrong hands.

It isn’t enough to definitively conclude a decision has already been taken on her future, but it is clear she is already thinking of what comes next.

“We will not allow this eThekwini Municipality to fall into the wrong hands, which is why we as the branches of the ANC in eThekwini, should remain resolute and strong and ensure that our municipality continues being what it is supposed to be because there are those who are salivating at the prospect of taking over it,” she said to her supporters.

“We won’t allow our people to suffer because the pockets of certain people are being filled up and when we want justice and things to be done correctly we end up getting arrested.”

Interestingly, she seems set for another battle even if her suspension is lifted.

Inkatha Freedom Party (IFP) caucus leader for eThekwini Municipality Mdu Nkosi has claimed Gumede should be removed from the council altogether unless she signed a leave of absence form when she was first suspended.

“When they come back, as the IFP we are going to demand that they produce their leave of absence forms which they signed because you have to fill a form and sign it,” said Nkosi.

“This would mean that automatically these two people should no longer be councillors as they have to be removed because they had not attended three consecutive meetings without approval.”