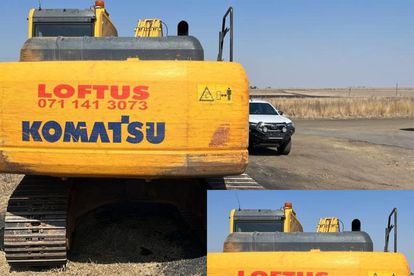 Five suspects, who were busted with a stolen excavator, made their first appearance at the Bethal Magistrate’s Court on Wednesday, 24 August.

THE AGE GROUP OF THE FIVE SUSPECTS DISCLOSED

The five suspects aged between 25 and 40 were arrested by the police from Bethal Police on Tuesday, 23 August 2022 on charges of being in possession of suspected stolen property.

Police spokesperson Brigadier Selvy Mohlala said their arrest came after police received a tip-off about a suspicious excavator machine on the farm outside Bethal with suspects who were about to load it into a truck.

“The members responded swiftly to the information and on arrival at the scene, they cornered four suspects at the said farm premises and found them with the excavator as well as the truck which was alleged to have been organized to be used to transport it (excavator),” he explained.

POLICE LEARN THE ROOTS OF THE EXCAVATOR

Mohlala added that the police made their investigations and learned that the said machine was reported stolen at Mankweng in Limpopo Province earlier this month.

“The five suspects, Banele Mkhonza (25), Mduduzi Hadebe (32), Phumlani Nkosi (33), Themba Mtsweni (36) and Nsizwa Nxumalo(40) were then arrested by the men and women in Blue before they could have a chance to make their move,”Mohlala revealed.

“Later that day the police arrested [another] suspect who is alleged to be part of the group that was arrested. He too was charged with the rest. The suspects may possibly be linked to the case of theft in Limpopo.”

After making their first appearance, the matter was postponed to 30 August 2022 pending further investigation and for formal bail application.

The Provincial Commissioner of the SAPS in Mpumalanga, Lieutenant General Semakaleng Daphney Manamela praised members of the public for the valuable information that they provided to the police and further thanked members for their swift response which resulted in the arrest as well as the recovery of the excavator machine.

“Property-related crimes are some of the priorities in our day-to-day policing and we believe that we are making a notable mark in addressing this challenge hence the arrest is one of such,” said the General.