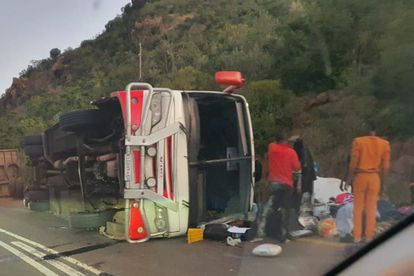 Five people have been confirmed dead by the Limpopo Department of Transport and Community Safety and dozens more are injured following a bus accident on the N1 North on Wednesday, 1 June.

According to the department, a bus overturned on the N1 north just outside Louis Trichardt, Limpopo; five people were killed and 56 more were injured.

“It is alleged that the driver of a bus pulling a trailer heading North, lost control of his vehicle and it overturned,” said the provincial transport department.

The road was closed for several hours on Wednesday as emergency personnel worked to rescue trapped passengers from the wreckage.

The bus accident was the third major crash in Limpopo in “less than 10 days.”

In the previous week, 12 people were killed in separate accidents on the N1 South and R529 road. Six people died in each accident.

“It is concerning that in less than ten days, we had three major accidents with 17 fatalities.  I want to urge motorists, especially public transport operators to drive with caution and reduce speed,” said Limpopo transport MEC Mavhungu Lerule-Ramakhanya.