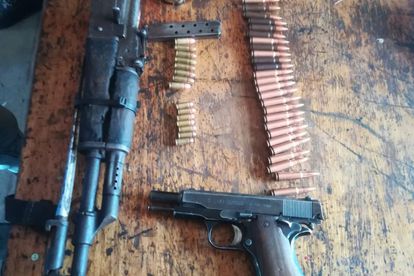 Police Minister Bheki Cele says firearms were the leading cause of murders in South Africa in the second quarter. PHOTO: Twitter/@SAPoliceService

Police Minister Bheki Cele says firearms were the leading cause of murders in South Africa in the second quarter. PHOTO: Twitter/@SAPoliceService

Firearms are the main weapon of choice when it comes to murders, with KwaZulu-Natal in the lead when it comes to fatal shootings. This was revealed on Wednesday in the latest crime statistics for the second quarter of 2022/2023.

Police Minister Bheki Cele presented the crime statistics for the period between July and September. 7 004 people were murdered in the country during those three months, Cele said.

This is an 841 increase in people murdered as compared to the same period last year. But during those months in 2021, the country was under Covid lockdown levels four, three and two, said Cele.

ALSO READ: Teenagers SHOT while leaving a tavern in KZN

961 of the reported murders in KwaZulu-Natal were a result of firearms. This was followed by Gauteng with 768 murders being due to the use of guns followed by the Western Cape with 526, said Cele.

“The high murder figure can also be attributed to multiple murders where two or more people were killed in one incident. The SAPS is investigating 250 dockets of multiple murders, with 578 victims.”

This includes the mass shooting at the Mdlalose Tavern in Orlando, Soweto where 17 people were gunned down in July.

Five suspects have since been arrested for the mass shooting.

Again, KZN is leading with the highest number of multiple murders, followed by Gauteng and then the Western Cape.

“Equally, the police in the three provinces continue to make arrests and bring the gunmen and their handlers to book. Police operational responses nationwide should continue to remove guns that are in the wrong hands.”

THE CAUSE OF KILLINGS IS DUE TO ALTERCATION

While the preferred weapon of choice is a firearm, the actual main cause behind murders across the country is altercations.

Arguments, misunderstandings and incidents of road rage and provocation account for 956 murders in the country during the second quarter.

“Vigilantism incidents claimed the lives of 528 people while 362 people were killed during the commission of a robbery.

“A total of 274 counts of murder were reported in those three areas combined,” said Cele.