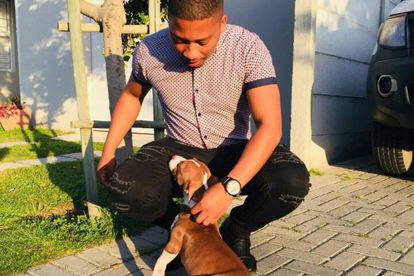 Dr Buti Kenny recently made the toughest decision of his life when he apparently had to say goodbye to his three-month-old Pitbull puppy.

PITBULL PUPPY SUFFERS BECAUSE OF CALL TO BAN THE ANIMALS

The voluntary handover to the SPCA was triggered by the recent lethal attacks by Pitbulls across the country.

“It was not easy but I had to say Goodbye to my boy Rocky (Pitbull Puppy ),” lamented Kenny on Facebook.

“He is 3 months old and we were getting along so well. I took him to SPCA, it wasn’t easy but It’s done.”

HOW HE CAME ABOUT TO ADOPT A RABBIT

Instead of being pet-free, Kenny opted to adopt a rabbit, but this was after he asked for suggestions on social media.

“So I decided to take your advice when you said I must not buy a monkey or a snake as Pets. Yesterday I bought a lovely Rabbit,” he said, however, he moaned about the cost of maintaining the bunny.

Although he claimed he was the friendliest he opted to surrender it to the SPCA for further safe-keeping after recent attacks.

At least 49 Pitbull terriers in the Free State province have been handed over to the Society for the Prevention of Cruelty to Animals (SPCA), according to Premier Sefora Ntombela, who called for stricter measures by dog owners to ensure that residents are safe.

One of the owners Lebohang Pali whose dog killed a three-year-old Keketso Saule is facing a charge of culpable homicide and animal cruelty. He made his second appearance in the Hennenman Magistrate’s Court today, Wednesday, 23 November where the matter was postponed to 23 January 2023 for further investigation and for Pali to arrange legal representation.

Pali’s family has also called for calm in the Hennenman area after an uncontrollable mob was baying for blood after the incident.