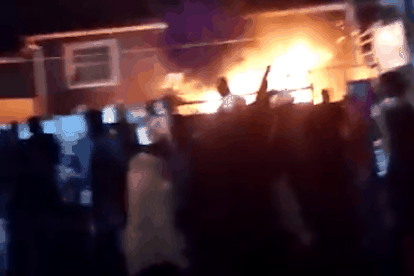 Residents in the Ocean View suburb of the Cape Peninsula have expressed their fierce rage over the past 24 hours, after a shootout between rival gang members claimed the life of young Emaan Solomons. The seven-year-old was gunned down by a stray bullet during an exchange of fire on Wednesday.

The community have, quite understandably, been enraged by the incident. Police arrived on the scene yesterday, but they were attacked and hassled by residents who’d reached boiling point. Ocean View has been blighted by crime and gangsterism for years, and Solomons was arguably an accident waiting to happen.

Her death has ignited a fuse in the small town. Gatvol locals are now fighting to reclaim their streets, and they began in brutal fashion overnight. Photos have emerged from the community which show one of the alleged gangsters beaten to a pulp on the pavement. You can see the image at the bottom of the page, but we must warn you, it will be bloody and graphic.

Houses allegedly belonging to regional drug kingpins were burnt down late on Wednesday evening, as the rallied community to the law into their own hands and exercised their brand of vigilante justice. The Cape Town Fire and Rescue Service confirmed these incidents via a statement:

“At about 01:25 this morning the City’s Fire & Rescue Service received an emergency call of a dwelling alight in Apollo Way, Ocean View. Fire crews were dispatched. They were escorted to the incident and found a double storey dwelling well alight. The fire was extinguished at 03:31.”

“A second dwelling fire in Scorpio Road was then reported. Simonstown’s crew responded under Police escort. This was also totally destroyed by the fire. There were further reports of blazes in Alpha Street, but the Fire Service was informed by SAPS not to enter as the area was extremely volatile.”

Throughout Wednesday, protest action engulfed Ocean View. Every member of society – from schoolchildren to pensioners – took part in demonstrations to show the watching eyes of the country that “enough is enough”. It’s been made as clear as day that gangsterism is not welcome in this part of the Western Cape

Amongst the protests, children at Kelinberg Primary School pleaded with criminals to stop killing them, in a heartbreaking display of solidarity with Emaan Solomons.