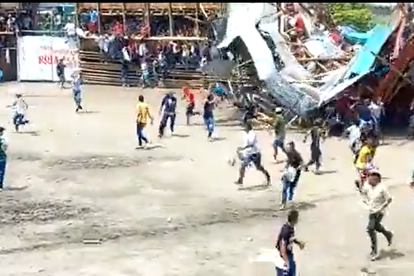 Hundreds of people were injured when a spectator stand collapsed in Colombia. Image: Screnshot

Hundreds of people were injured when a spectator stand collapsed in Colombia. Image: Screnshot

At least six people including a child were killed while hundreds of others were injured when a full three-storey section of wooden stands they were sitting on collapsed during a bullfight in the central city of El Espinal in Colombia.

The event/corraleja which happened on Saturday was part of celebrations of the popular San Pedro festival, pictures and videos of the incident were widely shared and circulated online.

According to New York Times, the corraleja, is a festival in which the public is invited to engage the bulls, even riding or taunting them. It is more informal than the traditional Spanish bullfight, and the bull is not killed in the end.

Tolima Governor Jose Ricardo Orozco confirmed that a one-year-old baby and two women are amongst the dead.

Local media also reported that the bull had escaped and was running loose in the streets.

The region’s health official said hospitals had treated 322 people of whom four were in intensive care.

Colombia’s outgoing President Ivan Duque said there would be an investigation, while President-elect Gustavo Petro urged local officials to ban such events.

“I ask mayors not to allow more events involving the death of people or animals,” he said.

He also added that it was not the first time such an accident had happened.

The practice has reportedly faced many legal challenges throughout the years and has been intermittently banned in parts of Colombia over concerns about cruelty to animals and danger to spectators.