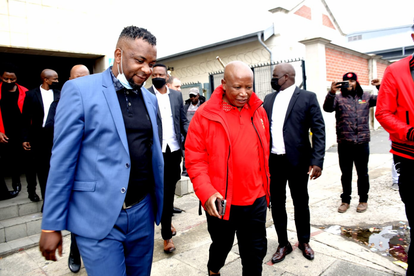 The EFF has issued a scathing statement against the SABC, demanding that it retract a ‘misleading and malicious’ report that the EFF ‘seeks loans from China instead of the IMF and World Bank’.

The EFF has lashed out at the SABC over an alleged report that insinuated the party’s beef over hefty loans from international bodies was largely due to factional ties.

In a statement released by the party earlier this week, the EFF demanded that the SABC immediately withdraws the reports with the Red Berets commenting that:

“The EFF demands that the SABC immediately withdraws its radio and social media reporting, which suggests that the EFF has called for South Africa to take loans from China, in place of the World Bank and International Monetary Fund.”

The EFF condemned the reports as nothing less than ‘malicious’, dubbing it a ‘fundamental distortion of the consistent message’ put forward by the party.

Furthermore, the EFF condemned the SABC as having willfully participated in the distribution of fake news. The Red Berets ensured that the broadcaster received a firm lashing for its effort.

“The SABC has willfully participated in damaging fake news, and must retract their distortion immediately both on radio and social media. We have registered this request to the Political Editor of the SABC. It is shameful that a public broadcaster can blatantly lie about the policies of an organisation which are available for public consumption.”

The Red Berets have not been silent on their contempt for the large loans SA has taken from global financial institutions. Seeking to clarify their stance on the subject in the statement, the party concluded by saying that:

“As things stand, South Africa’s debt sits at R4.3 Trillion. It is unsustainable to continue on the destructive path of seeking loans to attempt to resolve the perennial problems faced by this country.”