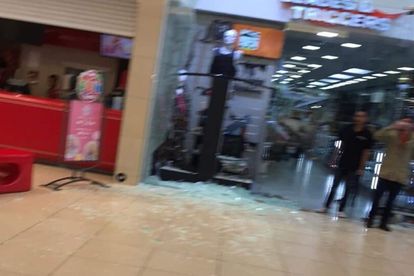 A group of armed men have reportedly hit a jewellery store in Gauteng’s East Rand Mall on Monday afternoon, entering the store and firing shots after taking a security guard hostage.

Eight men burst into the store and allegedly fired shots in the crowded mall before making a break for it in a blue Toyota Corolla.

“It is alleged that approximately eight suspects who were armed with shotguns and rifles held the security guard at gunpoint,” said police spokesperson Captain Mavela Masondo.

“They forcefully gained entry and held the staff at gunpoint. They then took an undisclosed amount of jewellery,” he said

“Police responded to the business robbery in progress. A shootout ensued between the police and the suspects.”

“The suspects escaped and hijacked a Toyota Corolla near the taxi rank at the mall. The car was found abandoned near the Ellis Park stadium in Johannesburg,”

Reports suggest a pedestrian was knocked down as they fled, and the robbers exchanged fire with law enforcement agencies, resulting in damage to the vehicle.

A trolley pusher was also reportedly shot in the foot by a stray bullet and was treated by paramedics on the scene.

They were pursued as they drove from East Rand Mall along North Rand in the direction of Witfield.

The mall has been evacuated and shoppers have been strongly urged to steer clear.

Police have now launched a manhunt for the suspects,