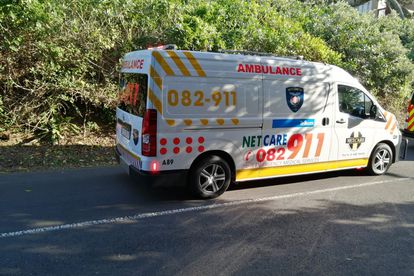 A woman was seriously injured and had to be airlifted to a nearby hospital after she fell approximately 15 metres from a tree trying to rescue a cat.

According to Netcare911 emergency services, the incident happened at around 15:15 on Tuesday afternoon.

ALSO READ: Would you do it? Harrismith lion sanctuary puts YOU in a cage!

“Paramedics responded to a fall’s case in Warner Beach South of Durban.

“Reports indicate that an adult female fell approximately fifteen meters off a tree, landing on the asphalt below.”

Netcare911 said it was believed the woman had attempted to rescue a cat.

“When medics arrived on the scene, the patient was found to have sustained serious injuries.

“She was treated on scene by a Netcare 911 rescue technician as well as an advanced life support paramedic.”

Due to the woman’s injuries, a Netcare 911 helicopter ambulance was activated to airlift her to the hospital for the care she required.

Also, on Tuesday, a duiker was rescued in Tongaat, KZN, when it was trapped in a manhole.

IT WAS NOT CLEAR HOW LONG THE DUIKER WAS STUCK

According to IPSS Medical Rescue, the rescue happened on Tuesday morning.

“IPSS together with the Umhlali K9 Search and Rescue Unit, responded to Tongaat for a trapped animal.

“On arrival, it was reported that a Duiker had fallen down a manhole on an unoccupied property. The animal was trapped with no means of escape.”

IPSS said members from Umhlali K9 SAR entered the void and located the animal before carefully bringing it to the surface.

“The Duiker appeared to be uninjured, and it was taken to a suitable vegetated area, where it was safely released.”