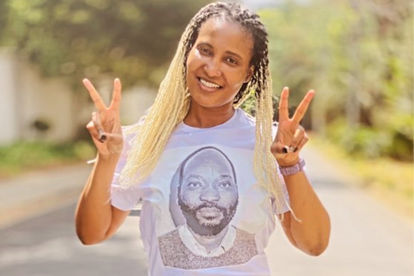 Former President Jacob Zuma’s controversial daughter, Dudu who was accused of inciting violence during the 2021 July unrest has stoked fires of another unrest following the suspension of Public Protector, Advocate Busisiwe Mkhwebane and a day before the planned National Shutdown.

Dudu is known for her controversial opinions on Twitter on matters concerning the country and politicians.

It looks like Dudu Zuma is not the only one who foresees some reaction from angry South Africans especially regarding the recent scandals concerning President Cyril Ramaphosa.

Busisiwe Mkhwebane on Thursday, just one day after she confirmed a probe would be launched into the Ramaphosa ‘Farmgate’ scandal.

Dudu told her Twitter followers that she ‘smells another unrest’.

Economic Freedom Fighters (EFF) leader, Julius Malema also took to Twitter and said “The streets are calling; we need to occupy the picket lines. The gloves are off.”

“The mafia king Cyril Ramaphosa has just suspended the Public Protector who was about to investigate him. How self serving?! We live in a gangster state for real.”

EFF Deputy President Floyd Shivambu said “ A Gangster, Money Launderer, Kidnapper, Briber and Swindler number 1 has chosen to suspend the Public Protector, Adv Busisiwe Mkhwebane! This is unacceptable and must be fought back with everything humanly possible. We can’t allow gangsterism to rule South Africa! Never!”