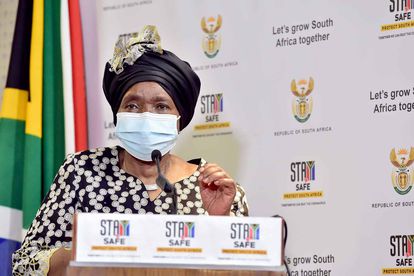 Derek Hanekom – the former tourism minister and all-round ANC stalwart – has made no attempt to hide his disdain for new lockdown rules introduced by Nkosazana Dlamini-Zuma this week, which redefine the parameters of ‘what constitutes a beach’. The uproar has spread across South Africa, and NDZ now has critics within her own party.

Ghaleb Cachalia is an MP for the DA. He also vented his spleen online, and slammed Dlamini-Zuma for having a pre-occupation with beaches. The new wording in the amended Level 3 regulations states that ‘any type of shore within 100 metres of the high-water mark’ will remain off-limits for visitors, unless they live in the Northern Cape.

“What is Dlamini-Zuma’s preoccupation with beaches? The regulations have been amended by NDZ, who now defines a ‘beach’ as any sandy, pebbly or rocky shore 100 metres from the high-water mark and low-water mark adjacent to the sea – or an estuary mouth extending 1 000 meters inland from the mouth.”

TheSouthAfrican was the first publication to pick-up on this bizarre amendment, and DA shadow minister Leon Schreiber reacted to the breaking news on Tuesday. He was incandescent with NDZ, questioning where her priorities lie…

“While countries ranging from the UK to Israel, Mexico, Romania and Poland are vaccinating millions of people each day… Cyril Ramaphosa’s government is hard at work trying to define what a beach is.”

However, it’s the stinging criticism from a high-ranking ANC member topping the bill today. Derek Hanekom currently serves as a presidential envoy for South Africa: His job title mandates him to promote investment, with a focus on tourism. Dlamini-Zuma’s amendments are far from helpful for his work – and Hanekom says the rules are ‘crazy beyond belief’:

“This [redefinition of what constitutes a beach] is crazy beyond belief! Cyril Ramaphosa, please intervene… Hundreds of restaurants fall into this category. And walking trails. And pavements, for that matter.”