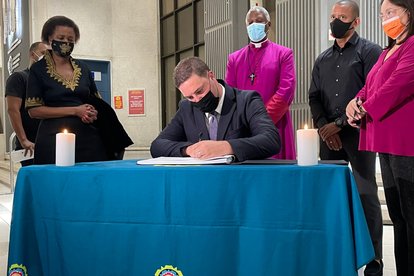 The City of Cape Town has lauded Desmond Tutu as one of its ‘greatest’ residents. Image: Geordin Hill-Lewis/ Twitter

The City of Cape Town has lauded Desmond Tutu as one of its ‘greatest’ residents. Image: Geordin Hill-Lewis/ Twitter

The City of Cape Town has announced that the entire region will be able to witness its tribute to the late Archbishop Desmond Tutu.

Table Mountain itself will pay tribute to Desmond Tutu

Cape Town Mayor Geordin Hill-Lewis  has confirmed that, starting on Sunday, Table Mountain will be lit up in purple.

“Tonight at 20:00, and every night this week, the City of Cape Town will light up Table Mountain and City Hall in purple – the colour that is so synonymous with The Arch.”

Hill-Lewis highlights that the City intends to celebrate Tutu’s life while mourning his death.

“As our city mourns the passing of Archbishop Desmond Tutu, the Arch, we also want to celebrate the man who dedicated his life to making our country a more just, humane and peaceful place for all.”

The Cape Town Mayor hopes that people around the globe will see the tribute and remember one of the City’s ‘greatest’ residents.

“As people here and around the world see Cape Town’s famous mountain lit up in purple, we hope it helps to remember and honour Cape Town’s greatest resident and all that he stood for.”

Hill-Lewis is hopeful that the tribute will help the nation contemplate the challenges Tutu faced and overcame.

“I hope also that the image will be a reminder to the world of the great challenges South Africa has overcome, of the great people who helped us to overcome those challenges, and that by following in the Arch’s example, every one of us can also make a positive difference in the world.”

The Mayor also encouraged residents to take part in yet another one of the City’s responses to Tutu’s death.

Road closures will be in place on Wale and Adderley street around the cathedral, with further road closures in the immediate vicinity to be confirmed.

Tutu passed away on Sunday in his Cape Town home surrounded by family. In conclusion, it is touching to see that his final home town is going to great lengths to commemorate his life.