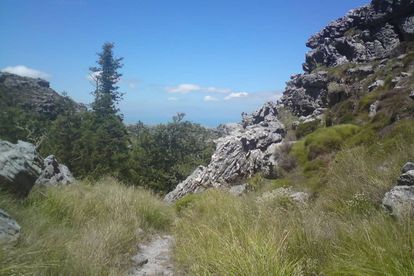 Police are investigating the death of a person found on one of the trails at Table Mountain National Park.
Photo: Sven Kröger/Flickr

Police are investigating the death of a person found on one of the trails at Table Mountain National Park.
Photo: Sven Kröger/Flickr

The first day of the reopening of South Africa’s National Parks on Monday 1 June saw one hiker make a gruesome discovery on Table Mountain.

Police are investigating the death of a person found on one of the trails at Table Mountain National Park.

The body was found near the Nursery Ravine, one of several trails leading to Kirstenbosch Botanical Gardens on the eastern slopes of Table mountain, on Monday about 16:30.

Emergency services were called in by the hiker and soon established that the person was deceased.

“The caller could see the body. The first response was to send a hasty team entering the reserve from Constantia Neck and following the Jeep track into the back of Table Mountain,” said Wilderness Search and Rescue (WSAR) spokesperson Johan Marias on Tuesday.

“Once the body was located and it was established beyond doubt the person was dead, evidence was gathered in conjunction with the [South African Police Service] and the body was readied for transport.”

Due to the position of the corpse it was decided that the extraction of the body would be completed on Tuesday morning.

Marais said that the operation was a success and that the body was now in the care of the State pathologists who are tasked with identifying the deceased and determining the cuase of death.

“A temporary landing zone was opened in Newlands forest and the body was eventually hoisted out and flown to the state pathology services staff who were waiting at the Newlands forest station,” Marais added.

“The body is now in the care of the police who have taken over the investigation,” he added. “We mourn the death of a person on the first day of the opening of the mountain in terms of the pandemic regulations.”

Do not hike alone

Marais urged hikers not to venture out onto the mountain trails alone. While group exercise is prohibited under the terms of the national lockdown, hiking trails enable adequate social distancing to be maintained by individuals hiking ‘together’ while still maintaining standard mountain safety protocols.

Under normal circumstances, WSAR recommend a hiking party is made up of at least four people.

When setting out hiking always tell someone where you are going and when you intend to return and stick to what you’ve told that person.

“In many cases people ‘slide’ into an emergency situation by a series of minor improvisations to the initial plan.

“Someone pitches delayed at the meeting point, so you are leaving later then anticipated.

“You have to hurry now and miss the one crucial fork in the path. To make up time you start bundu bashing to ‘take a shortcut’. After a while you turn around and see that you can’t make out were you came from.

“Be alert about what is happening and about the consequences of decisions made. Rather ‘abort the mission’ and walk the same way back instead of pressing forward into unknown territory.”