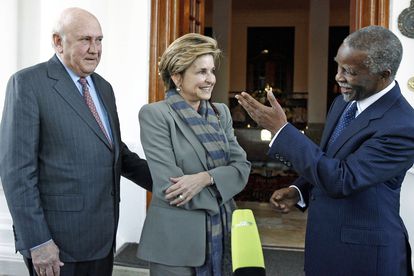 Ramaphosa said Elita de Klerk sent him a message early on Thursday, informing him of the passing of her husband. Ramaphosa said he was saddened by the news and offered his condolences.

The former deputy president of the country died after a long battle with mesothelioma cancer.

Ramaphosa said the government is waiting to hear what de Klerk’s representatives have planned for his funeral. However, the government “stands ready” to support the family and the F.W. de Klerk Foundation in bidding the late statesman farewell.

Although the president did not explicitly confirm that F.W. de Klerk would receive a state funeral, earlier on Thursday, Dave Steward, the Chairperson of the Foundation told Cape Talk that Ramaphosa was expected to issue a statement regarding those arrangements.

The family of De Klerk’s predecessor P.W. Botha declined the offer of a state funeral in 2006 when he died. Former President Thabo Mbeki attended the private service in George, Western Cape on 8 November 2006.