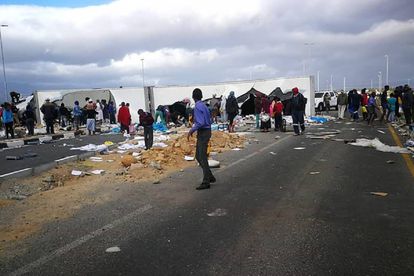 Highway traffic has been affected, on the N1, in De Doorns, by groups of looters who, for the most part of Thursday morning, have been stoning cars and stealing goods from abandoned freight trucks.

What is happening in De Doorns?

Videos have surfaced on social media, showing large groups of rioters causing havoc on the N1, in De Doorns, Western Cape. The chaos erupted on Thursday morning when a large group of rioters, believed to be disgruntled farm workers from the area, took to the N1 highway and pelted passing cars with stones.

From the looks of it, some of the truck drivers may have been forced to stop and avoid losing control. This, however, only exacerbated the situation.

Rioters were filmed looting some of the trucks, making it off with electronics and other valuables. At the time of publishing this article, the situation had not improved and law enforcement authorities have yet to contain the situation.

What prompted the looting?

There has been no official word from the leadership of the rioters. At this time, all we know is that the unrest was orchestrated by disgruntled farmworkers.

We expect more information to filter through as the day progresses. Interestingly, these riots resemble the infamous protest action that was led by De Doorns farmworkers, in 2012.

At the time, a change in power dynamics at Keuroschkloof farm caused mass protest action that captured the attention of the entire country.

According to an archive GroundUp report, the farmworkers were not happy with the drop in wages they were forced to accept after South African Fruit Exporters (SAFE) took over the reins from Perry Smith, their former employer who passed away months before the unrest.

The workers hourly rate was reduced from R14.51 to R10.60, resulting in a substantial drop in her wages. Before SAFE took over, the lowest-paid worker was getting R90 per day and the highest was getting R130 per day.

After days of unrest and interventions by local government and other stakeholders, the matter was put to bed and all seemed well in De Doorns for about seven years.

The scenes we have seen on Thursday morning, though, paint tell a different tale about the tensions that may have been bubbling under in the Cape Winelands community.

You can watch all the looting videos below.