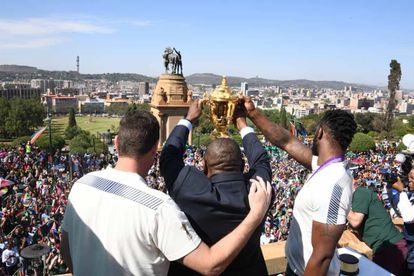 Think about every job interview you’ve ever gone for, or each individual exam you’ve had to take in your lifetime. The pressure is enormous. But all that could be amplified infinitely by the spectre of a World Cup final looming over your head. The Springboks, however, don’t do “bottling”. Not anymore, and certainly not when they have President Cyril Ramaphosa watching on.

The head of state has been just as big a part of the trophy-winning celebrations as the rest of the squad. He was there in Yokohama when Siya Kolisi first lifted the Webb Ellis cup, and he’s been toasting the team ever since. Ramaphosa met up with the squad once more, as they embarked on a victory parade across Gauteng.

They are taking an open-top bus tour through Pretoria, Johannesburg and Soweto on Thursday. However, it was left to Cyril Ramaphosa to kick things off, and he did so with a bang: The president shared a story about his encounter with the Springboks just before their game against England started on Saturday.

Cyril Ramaphosa on the “nervous” Springboks

He claims that the players told him they were nervous – but with Cyril being Cyril, he didn’t believe them for a second. Ramaphosa stated that the players had “victory written in their eyes” – we’re not sure that’s the exact phrase, but anyway – and congratulated them on their truly unique achievement, and thanked them for settling his own nerves.

“Before the match, I went to meet the team and say a few words. before I did so, I asked them how they were feeling. Siya said he was nervous, Rassie said he was shaking like a leaf, and many other players said they had nerves. But I knew they were lying to me!”

“They were telling me lies, because as I shook their hands and looked at them, I just saw victory written all over their eyes. They are true champions, and with this victory, we are the first team to win the Rugby World Cup in three continents – Africa, Europe and Asia. No others have done this.”

In a week where South Africa became world champions and R363 billion was raised for the economy through an investment conference, Ramaphosa himself may come to represent the zeitgeist of the country. Hope has been renewed in the face of adversity, and although it may not stay this way forever, a moment like this is truly worth treasuring. Now, what kind of team-talk could Cyril give Bafana Bafana, we wonder?