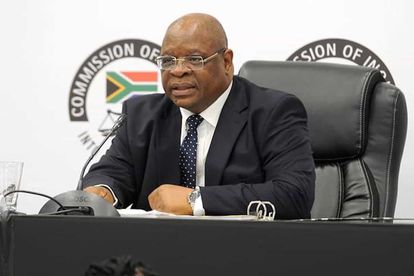 Deputy Chief Justice Raymond Zondo is not taking ex-spy boss Arthur Fraser’s attack on him lying down. Fraser penned a scathing letter to a panel overseeing nominations for the Chief Justice position, of which Zondo is a candidate.

The ex-spy boss has objected to Zondo’s nomination – all based on how he claims he was treated as a witness at the State Capture Commission of Inquiry, which the DCJ is presiding over.

Fraser claims he was never granted the chance to give his side of the story – in response to several witnesses who gave damning testimony.

In a statement issued by the State Capture Commission on Thursday, DCJ Raymond Zondo puts the blame on Arthur Fraser.

The commission says Fraser failed to come forward with information pertaining to alleged acts of state capture and corruption, despite repeated calls from February 2018 to early in 2020, inviting past and present directors-general and ministers to do so.

Fraser was the director-general of the State Security Agency under former president Jacob Zuma.

The commission’s secretary, Professor Itumeleng Mosala, Fraser never lodged an application for leave to give evidence.

“It is not clear why, if Mr Fraser felt that he had been implicated by certain witnesses in wrongdoing, he did not follow the Rules (of the Commission) and apply for leave to testify. In this regard it is to be noted that Mr Fraser is legally represented by lawyers who are familiar with the Rules of the Commission. If Mr Fraser wanted to testify, he needed to comply with the Rules that govern the position of persons who want to testify to defend themselves against witnesses who have implicated them,”

Fraser has featured prominently at the commission, with witnesses testifying to how the State Security Agency, which he headed, was used under President Jacob Zuma’s tenure as a tool to pursue his adversaries.