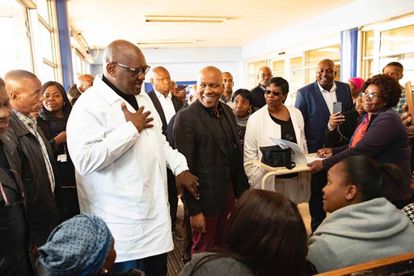 Gauteng Premier, David Makhura, made an unannounced stop at the ailing Sebokeng Hospital in Johannesburg, on Wednesday, to assess the way things are run with the medical facility under intense scrutiny.

Sebokeng Hospital and all of its problems

Sebokeng Hospital is one of many Gauteng medical emergency centres with major problems.

Like others, it is highly understaffed, there are never enough beds to accommodate in-patients and the conditions of the rooms are not up to the appropriate hygienic standard of a hospital.

In a recent assessment overseen by the DA’s Jack Bloom, it was established that the waiting period at Sebokeng Hospital averaged at around seven hours to get medical attention.

While Priority 1 patients get first preference at all times, Bloom was very critical of how Priority 2 patients, or otherwise referred to as the ‘walking wounded’, were neglected in waiting areas for hours.

Makhura, holding true to his word to promote an ‘activist government’, was accompanied by Gauteng Health MEC, Bandile Masuku in the unannounced visit to the embattled hospital on Wednesday.

Just wrapped up an unannounced visit at Sebokeng Hospital with MEC @bandilemasuku. We will be working with public servants, solving problems in the healthcare system. Sebokeng & other regional hospitals will be on our radar, part of our programme to overhaul primary healthcare. pic.twitter.com/YkgG3zeiHU

Much to his surprise, Makhura found an improved situation at the hospital, with operations running smoothly, for the most part.

Sebokeng to get staff boost

The Premier noted that as much as things have improved, there was still a missing piece to the jigsaw.

“This hospital has a human resources problem and that’s mainly due to its classification which fails to attract personnel. One of the things that need to be done to improve it is increasing the intake of personnel,” he stated.

Makhura vowed to initiate a plan to attract more staff to the hospital in order to increase efficiency, a plan that will be implemented in all public hospitals in the province.

Good work there, Makhura. We need more of this, please.