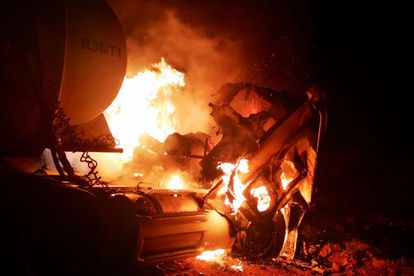 Firefighters reporting to a fuel tanker blaze in Gauteng’s West Rand on Wednesday night fell victim to an attack at the hands of ‘criminal protestors’.

According to Gauteng’s traffic enforcement officials, emergency services were called to the scene of a vehicle fire on the R24 near Orient Hills. This specific area has previously been embattled by violent protest action, which includes damage to municipal property and infrastructure.

Firefighters attacked while on duty

On arrival, City firefighters attempted to extinguish the flames that had engulfed a fuel tanker. While attending to the blaze, the fire fighting vehicle was attacked by a mob of community members. While personnel managed to escape the situation unharmed, the firetruck was badly damage. As reported by Gauteng’s traffic services:

It’s alleged that the same community had previously dug up sections of the R24 – a major route to Botswana and Magaliesburg – in an apparent protest for better service delivery. On Wednesday, traffic was initially diverted to the R400 in order to ensure the safety of motorists and commuters.

The situation, however, went from bad to worse following the attack on attending firefighters. The escalation resulted in damage to multiple traffic enforcement vehicles.

The detour around the chaos also became unsafe when it was reported that motorists were being targeted on that stretch of gravel road. According to reports, motorists were robbed while avoiding the protest action, which, by that time, had descended into wanton criminality.

It’s understood that police have regained control of the situation but that the area still remained volatile on Thursday morning.

No arrests in connection with the arson or the attacks have yet been made.