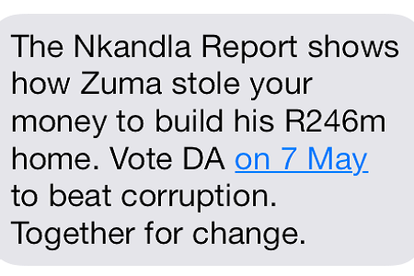 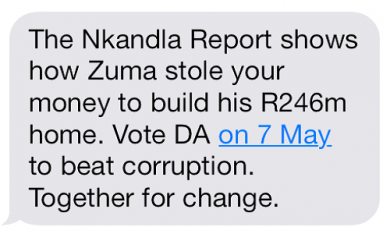 THE Democratic Alliance (DA) left the South Gauteng High Court victorious on Friday, after Acting Judge Michael Hellens dismissed a case brought against the main opposition party by the ANC.

The DA and the ruling ANC met in a rare stand-off in court after the ANC sued over a text message campaign sent out by the DA earlier this week, which the ANC believed went against the Electoral Act and the Electoral Code of Conduct. However, Judge Hellens deemed the SMS campaign to be acceptable as “fair comment” after all, saying it was supported by the Bill of Rights and the principle of freedom of expression enshrined in the South African constitution.

The text message, which quickly became known as the “Nkandla SMS”, was a public appeal campaign to gain votes for the DA in protest to the details revealed in last week’s Nkandla report on President Jacob Zuma’s R246 million worth of upgrades to his homestead, which Public Protector Thuli Madonsela simply brandished a “licence to loot”.

The message read: “The Nkandla report shows how Zuma stole your money to build his R246m home. Vote DA on 7 May to beat corruption. Together for change.”

The ANC was clearly not happy with the outcome in court; despite repeated focus on the damning terminology, “licence to loot”, ANC spokesman Jackson Mthembu kept insisting before and during the proceedings that “nowhere in the Public Protector’s report does it state President Zuma ransacked the public purse.”

Judge Hellens had to introduce an Oxford dictionary to the courtroom to put the disagreement to rest, establishing that the definition of the term “loot” could equate “stealing”, as it was said in the DA’s SMS campaign. Even after the court decision, the ANC continued to insist that the judgment was made erroneously and that the principle of freedom of speech does not cover electoral matters.

The DA called the court decision “both a victory for freedom of speech and for the truth about Nkandla” and will continue to focus on its election campaigns as well as on motions to impeach President Jacob Zuma.

The ANC is unsure about its options at this point, but has states that it will “note and will study the judgement and consult with counsel to evaluate the options available”.