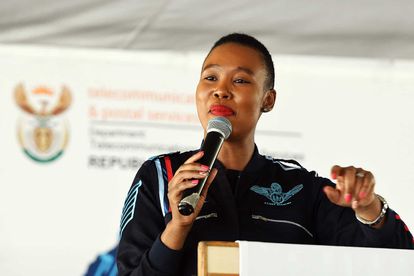 The Democratic Alliance (DA) is unhappy with the Minister of Communications and Digital Technologies, Stella Ndabeni-Abrahams, after she confirmed the resignation of South African Broadcasting Corporation (SABC) board member Bernadette Muthien, months after the opposition party had asked her about it, but to no avail.

Muthien, a board member at Pan South Africa Language Board, was one of eight people to be appointed to the public broadcaster’s board last year, amid its financial crisis. The DA said history has shown that the resignation of a board member at the SABC was usually a sign of major trouble.

“In July, the Democratic Alliance (DA) was reliably informed that Bernadette Muthien, an SABC board member had resigned and publicly requested official confirmation from Ndabeni-Abrahams, and none was forthcoming,” said DA MP Phumzile Van Damme in a statement on Friday, 25 September 2020.

“And now months later and while Parliament is in recess, she has decided to finally officially inform Parliament in the publication of Announcements, Tablings and Committee Reports”

Van Damme: Muthien must be summoned

Van Damme has fired shots at the minister, accusing her of lacking courtesy and said it was yet another example of Ndabeni-Abrahams’ utter disregard for Parliament.

She said the party intends writing to the Portfolio Committee of Communications, Boyce Maneli, to ask that Muthien be summoned, so she can give reasons for her exit.

“Parliament is often expected to take responsibility for (and clean up) the mess and chaos at the SABC. Any potential issues must be nipped in the bud, and this can only be done if Parliament is informed timeously of issues at the public broadcaster as they arise. Any secrecy severely hampers Parliament’s ability to conduct its oversight,” Van Damme added.

The DA MP said she hopes Muthien will take the party as well as Parliament into her confidence and spill the beans on why she resigned – adding that by doing so, she would be helping to expose serious matters within the ANC, if any exist.

She said they needed to act, if the SABC found itself in another crisis.

“The DA will continue to push for SABC to always play open cards with the South African public to which it is accountable. For this reason, we will continue call out those who seek to challenge Parliament’s constitutional role”