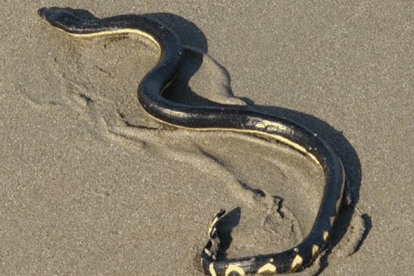 Beachgoers in Cape Town have been rocked by the news that a yellow-bellied sea snake washed up on the sands of Fish Hoek earlier this week. Environmental organisations have told locals to be on high alert, as more of the serpents are likely to arrive onshore in the coming days.

Ocean Pledge raised the alarm on Wednesday, explaining that these types of snakes are indeed ‘highly venomous’. Beaches remain open throughout the long weekend, but visitors are asked to be super-vigilant:

“A yellow-bellied sea snake washed up on Fish Hoek beach this week. When these guys wash-up, it’s a bad sign as it means they are likely sick. This also means that we can expect more to wash up along the coast over the coming days so please keep a lookout on your beach strolls.”

“Don’t try to put them back in the water, and do not handle the snake! They will just re-beach. These sea snakes are venomous, so mind the sharp end – and keep dogs and kids away. Currently, there is no anti-venom available in Cape Town for these type of bites.”

How dangerous is the snake found on Fish Hoek beach?

The group is right to react with caution. Lou Carter, an expert on the subject who writes for Snakes For Pets, has confirmed that the animal is ‘extremely deadly’. However, there’s something of a paradox to take note of…

Not only are there no reported human deaths as a result of a bite from a yellow-bellied sea snake, but these creatures have been described as being ‘not that aggressive’. They only bite if they feel threatened, Carter writes:

“The yellow-bellied sea snake is beautiful, but extremely deadly. Despite the toxicity of its venom, which contains neurotoxins and myotoxins, there aren’t any reported human deaths. This is primarily because this species of sea snake is only encountered when a sick or weak snake drifts ashore.”

“That being said, sea snakes aren’t that aggressive. If you were scuba diving and one showed up, it would try and get away from you. Compared to them, you’re a big, large, and unpredictable animal. They’re afraid of you, so the first thing that any sea snake will do is try and get away from you. Only if the snake is cornered will it be aggressive.”

Yellow-bellied sea snakes: Yes, they can kill you…

So if you come across one of these sea snakes on the beach this weekend, it’s likely to be extremely ill or already dead. However, that’s no excuse to let your guard down. You should not approach it, nor should you try and throw it back in the sea. There is a list of local contacts you can reach out to if more yellow-bellied sea snakes arrive on the shore.

Infirmed or otherwise, these things are still deadly: