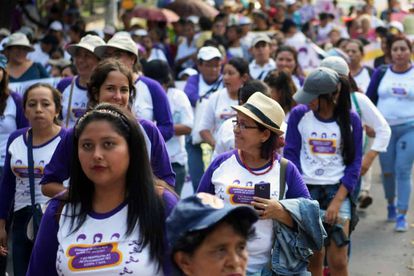 Women march during the commemoration of the International Day for the Elimination of Violence Against Women, in San Salvador, on 26 November 2018.
AFP/MARVIN RECINOS

Women march during the commemoration of the International Day for the Elimination of Violence Against Women, in San Salvador, on 26 November 2018.
AFP/MARVIN RECINOS

The first Women’s Day meeting – the first call for equality – was held on 28 February 1909 in New York. The Socialist Party of America organised the event, with Theresa Malkiel at the helm.

While not so well known in South Africa – we celebrate National Women’s Day on 9 August – South African women are challenging the status quo, smashing glass ceilings and demanding equality.

This year’s theme for International Women’s Day is ‘Balance for Better’. This year, the focus is on how we can create a gender-balanced world. It is also a stark reminder that “everyone has a part to play – all the time, everywhere.”

Women are joining grassroots activism networks. It propels us to take action and demand change. According to the official website, “we are entering an exciting period of history where the world expects balance. We notice its absence and celebrate its presence.”

Discussions around gender balance and equality, and by extension demolishing the wage gap – take the spotlight this year. Why? Because gender balance drives the economy and is vital for communities to thrive.

How can we do this? By celebrating the progress we’ve made and highlighting those achievements. By raising awareness against bias and inequality. And most importantly, but encouraging and supporting women as we go along.

In South Africa, large sections of the population still face economic challenges – especially in rural areas. The success of International Women’s Day is widely celebrated, however, campaigning for women’s rights in South Africa and other developing countries will take different forms.

We also experience higher levels of violence against women. In addition, poorer access to healthcare, in turn, reduces the quality of life and life expectancy of South African women. While not wholly unique, our situation needs a unique solution.

Ways to bring about change in South Africa

Jieun Lee suggests that one of the ways to bring about equality is to increase the number of women teachers in schools. She explains:

“Teachers are important figures when it comes to students’ gender-related attitudes towards different school subjects. Along with parents, teachers determine the extent to which traditional academic stereotypes such as ‘boys are good at maths and girls are good at reading’ are passed on to future generations.”

Another way to bring about change is supporting activists and the “powerful advocates of political change.” According to Maria Martin de Almagro, women activists in the Democratic Republic of Congo showed how forging effective alliances can empower women. She said:

“Although women in the DRC have been victims of tremendous abuse and violence, they are both creative agents and innovative activists. They have participated in peace negotiations and have managed to secure constitutional change.”