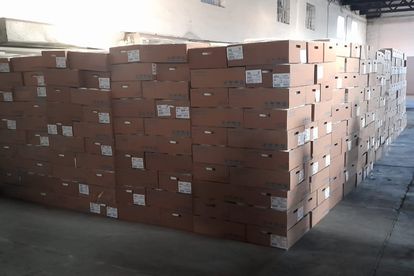 A 44-year-old suspect was arrested for possession of stolen goods at a warehouse in East End Industrial Park, Bloemfontein on Wednesday, 13 July. He is the owner of the building, which was packed with boxes of car parts that were allegedly stolen from a hijacked truck in May 2022.

“The 44-year-old suspect could not produce proof of ownership of the goods and was subsequently arrested,” said Kareli.

The catalytic converters were allegedly stolen from a truck hijacked in May 2022, according to the police’s investigations.

The truck was making its way from the Eastern Cape to Gauteng when it was attacked by a group of suspects in a bakkie.

The suspects allegedly struck when the driver stopped the truck at the side of the road near Venterstad, Eastern Cape.

“The suspects put the driver in their vehicle and drove towards Bloemfontein where they met with the 44-year-old who arranged for storage.

“The truck was later handed back to the driver without the cargo and Police were made aware of the incident,” said the police spokesperson.

The arrested 44-year-old suspect is expected to appear in court imminently on charges of possession of stolen goods. Further arrests are a possibility, said Kareli.