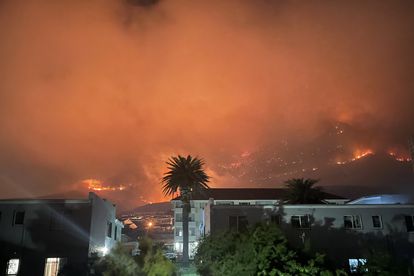 An independent investigation, commissioned by South African National Parks (SANParks), into the Devils Peak fires in Cape Town on 18 April ruled out “natural cause” for the wildfire. The fire, which broke out near the University Of Cape Town (UCT), was probably caused by arsonists, concluded the report, which was made public on Thursday, 24 April.

Rob Erasmus, from Enviro Wildfire who conducted the investigation, said CCTV footage showed that a vehicle was seen driving slowly along the shoulder of the freeway near the area where the fire broke out – smoke was detected minutes after the vehicle pulled away.

Erasmus added that it is believed that an object was thrown from the car but could not divulge the distance it was tossed. The investigation team is experimenting with various objects to determine how ignition could have occurred.

The authorities, however, know the make and model of the vehicle, in question the license plate is not visible on the footage.

SANPARKS is offering a R10 000 reward for any information about the fire.

“[Erasmus] stated that the investigation report provides compelling evidence suggesting that the fire may have been started as a malicious act. This evidence is currently being investigated by law enforcement agencies,” said SANParks in a statement.

The report into the wildfire that burnt approximately 600 hectares of land within the Table Mountain National Park (TMNP) and neighbouring areas ruled out natural causes – including rock falls, lightning strikes or an accidental/negligent incident such as abandoned camping or cooking fires – as possible causes of the wildfire. Notaby, the report confirms that the fire was not started by a homeless person as was initially claimed.

The report said TMNP complied with the legal requirements of the National Veld & Forest Fire Act – having cleared 620ha of alien vegetation from the area where the fire occurred over the past 36 months – and its firebreaks and readiness for firefighting was up to standard.

“It is important to understand that the purpose of firebreaks is not only to stop fires, but also slow down the spread of fires.

“…The firebreaks in the area around Devils Peak were in place and had been maintained before the fire season.

“In this fire, windblown embers travelled long distances and caused new fires to start (called ‘spotting), which meant that firebreaks were not effective means of preventing the fire from spread,” read the report.

The longest distance a burning ember travelled on the day of the fire was more than 350 metres when a palm tree in Claremont’s Main Road was set alight.