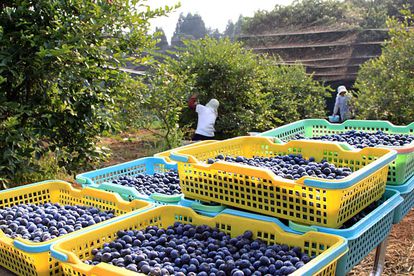 The South African blueberry industry is expecting year-on-year production growth of around 45% in 2019 and this will have an exponential effect on job creation, according to the South African Berry Producers Association (SABPA).

Stellar growth of the blueberry industry

The SABPA projects the industry to produce about 17 000 metric tons of blueberries in 2019, compared with the 11 700 produced the year before.

This is actually just the continuation of the meteoric rise of South African blueberries, especially in terms of export growth.

In 2014, South African exported just 1 558 metric tons of blueberries. The industry typically exports around 70% of its product, which amount to 14 000 metric tons in 2019. This represents an average annual growth rate of close to 160% which amounts to almost 800% over the last five years.

And it is nowhere close to slowing down according to industry insiders.

The future looks even brighter

Elzette Schutte, operations manager at SABPA, has forecast production to reach a quite phenomenal 50 000 metric tons within the next five years.

If South Africa could maintain its export levels with that growth, and it would definitely have to, it would place the Rainbow Nation among the Netherlands and the USA as the fifth and sixth-largest blueberry exporters in the world respectively.

According to a recent economic impact study of the industry, compiled by the Western Cape Department of Agriculture in collaboration with the SABPA, the South African blueberry industry is one of the fastest-growing horticultural industries in the country.

There are expected to be 4 800 hectares of blueberries planted in the country by 2023.

Growth will create plenty of jobs

The growth will also have a massive effect on jobs according to the SABPA.

In the wake of the terrible employment statistics in South Africa that were recently revealed this could be a huge win for the country.

However, as stated above, the growth is almost exclusively hinged on maintaining export levels of around 70% or more.

Perhaps it could make more sense to export less if and when the employment situation gets better in South Africa, but for right now growth relies on finding more export destinations.

“Currently, South Africa does not have access to key markets like China and South Korea at a time when blueberry imports are growing phenomenally in these markets,” said Ndhlovu.

South Africa cosying up to China

It is no secret that relations between South African and China have been growing closer under President Cyril Ramaphosa.

He even made two references to China in his state of the nation address and backed the country in its trade war with the United States of America.

China has also expressed its support of Ramaphosa as President of South Africa on numerous occasions.

Hopefully, this will help expedite the process of gaining the export protocols that will allow South African blueberries to be exported to China. Apparently, this can take as long as 17 years.