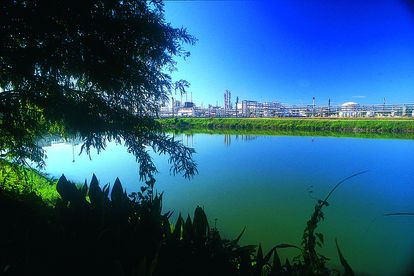 Management at struggling petrochemical giant Sasol will be heaving a sigh of relief with the announcement on Friday that the company has agreed a deal to sell a 50% stake of its troublesome Lake Charles project in the United States for US$2-billion (R33.3-billion).

Sasol has been battling high debt levels, reduced demand and volatile oil prices for some time now – to the extent that in June it announced a restructure of the business, the closure of some operations and retrenchments.

Part of the debt burden results from the Lake Charles Chemical Project in the US state of Louisiana, which has been beset by significant delays and cost overruns.

So much so, that joint CEOs Bongani Nqwababa and Stephen Cornell resigned in 2019 due to the cost overruns that have been labelled a ‘fiasco’ by some media reports.

Cut a chunk of long-term debt

But the US$2-billion agreement – which is still subject to shareholder approval – with LyondellBasell for a joint venture going forward will enable Sasol to cut around 20% of its long-term debt of around US$10-billion, while still enabling the business to hopefully enjoy some of the fruits of its investment and labours in Lake Charles.

According to Sasol, the transaction will create a joint venture with LyondellBasell, concerning the Base Chemicals Business at Lake Charles and the associated land.

It said it would retain ownership and the US Performance Chemicals Business – the other legacy base chemicals assets at Lake Charles – and the remainder of the Lake Charles property, enabling it to utilise vacant land to develop further facilities on the property.

Enhance the benefits of the project

“The intention was to generate significant proceeds to apply towards outstanding debt while enhancing the benefits to be gained from the substantial investment in Lake Charles by partnering with a company with world-class capabilities in commodity chemicals in the industry,” Sasol noted in a statement to the JSE’s Stock Exchange News Service.

“Through this process it became clear that the proposal that offered the best combination of upfront and the long-term value was that offered by the LyondellBasell group.”

LyondellBasell is a large multinational plastics, chemicals and refining company headquartered in Rotterdam, Netherlands. It has assets of more than US$35-billion and employs around 19 000 people.