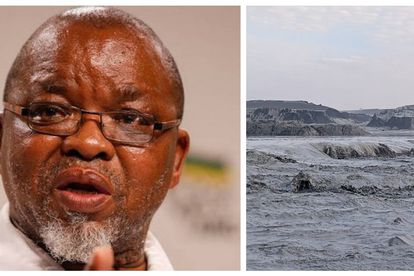 The mine dam which burst in Jagersfontein and killed three people while sweeping away homes was initially owned by De Beer.

Minister of Mineral Resources and Energy Gwede Mantashe explained that they were not in charge of the mine slime dam. But instead, a court judgment had found that it belonged to mining giants, De Beers.

“The judgement that I referred to was that the ownership of those dams was reinforced by the judges… and declared the Department as having no jurisdiction over those dams.”

The issue, he said, is that the owner at the time was De Beers and therefore the court judgment stated the slime dam belonged to them.

“So, De Beers has the right and responsibility to sell it to anybody. They sold it to Superkolong Consortium, which is a consortium that got those dams in 2010,” said Mantashe.

The Department, therefore, cannot grant licences to other people because it is the property of other people.

“But it would be irresponsible of us to close our eyes and hide behind this judgement. We are fully engaged on how to facilitate a resolution to that crisis that we are confronted with in Jagersfontein,” said Mantashe.

The devastating floods have left three people dead and up to 40 people hospitalised.

Mantashe said nine homes were swept away while 20 have been completely damaged.

BUT WHO MUST COMPENSATE THOSE AFFECTED?

Asked who must compensate those affected by the damaging floods, Mantashe said it is mainly the responsibility of the owner of the slime dams.

“The company that is the owner will take the bigger responsibility to stable, assist and facilitate that action because the assumption is that it should have been in charge. Therefore compensation for those with fatalities and in terms of damage to property will be taken as a responsibility of the company that owns the slimes dam.”

But the slime which covered the area and surrounding neighbourhoods was toxic. Mantashe confirmed that it was not good for the environment or people. This is why it is enclosed in a dam.

“Slime dams are not friends of the environment. They pollute. That is why they are dammed so that the impact is not widespread. It is limited and contained where there are slime dams, which is mitigating against bad environmental impact. Once it bursts, the environment is going to be impacted, people will be impacted and properties will be impacted. That is the reality that we are looking at.”