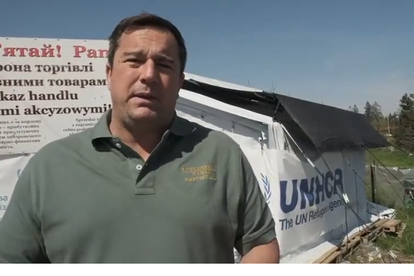 This is a turn-up for the books: John Steenhuisen has arrived in the east of Ukraine this week, as he prepares to spend the next six days surveying the damage of the Russian invasion. But what is the DA leader’s mission statement?

Well, according to the political leader, it’s important for him to see the horrors of war for himself. Visits to the capital of Kiev, as well as a host of refugee camps and mayoral officers, place highly on the agenda.

As far as Steenhuisen is concerned, he feels that his duty as a politician is to ‘tell the unfiltered truth’ about Russia’s act of aggression. With so many in South Africa still siding with Vladimir Putin, the opposition frontman wants to offer a support network to Ukraine that the ANC simply will not.

In a statement posted earlier, Steenhuisen lashed out at the ANC’s diplomatic stance on Russia, saying that their attempt to ‘remain neutral‘ in the face of this conflict ‘is not something that can carry on’.

“I will embark on a six-day tour of various parts of Ukraine – mostly around the capital, Kiev – to ascertain for myself the situation in a country that has been under siege from the Russian army for over two months.”

“I will visit refugee camps, and meet various mayors, governors, business leaders, students and ordinary Ukrainian citizens to see first-hand the effects of the Russian invasion and the ongoing occupation of parts of Ukraine.”

“We owe it to the people of Ukraine to tell the unfiltered truth about what is taking place there so that the world can stand united in bringing this injustice to an end. We dare not pretend that this is a war that has nothing to do with us.”

Today, DA Leader, @jsteenhuisen arrived in the city of Lviv in Western Ukraine from where he will embark on a six-day tour of various parts of Ukraine to see, first-hand, the effects of the Russian invasion and the ongoing occupation of parts of Ukraine.#JohnVisitsUkraine pic.twitter.com/MIAN366Yos