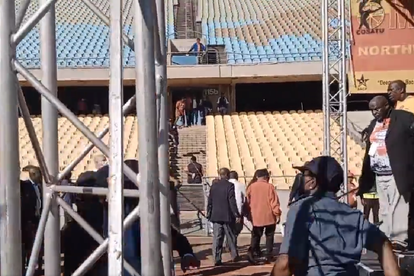 Cyril Ramaphosa was whisked away from an address in Rustenburg on Sunday – Photo: Twitter

Cyril Ramaphosa was whisked away from an address in Rustenburg on Sunday – Photo: Twitter

A hostile crowd in Rustenburg, North West gave Cyril Ramaphosa the shock of his life on Sunday, after the ANC leader was effectively ‘chased away’ from his May Day address by scores of COSATU members.

The shocking visuals were broadcast live, and the event descended into chaos once President Ramaphosa took to the stage. Although the crowd was sparse, those who turned up all had axes to grind.

Cyril was booed the minute he started speaking, and after twice attempting to deliver an address, the boisterous crowd refused to let him settle. Ramaphosa also tried to calm the crowd, with limited success.

In the end, as angry crowd members advanced towards the stage, the security teams present decided that it was no longer safe for the ANC leader to stay where he was. Alongside Minister Blade Nzimande, Cyril was escorted away.

Please take your 39 seconds of your data and watch Ramaphosa escorted by Nyala.
Black people are fed up pic.twitter.com/3D6pyDnDpW

BREAKING: The president @CyrilRamaphosa whisked away as protesters demanded that he leaves. @Newzroom405 pic.twitter.com/2LVyOg6knP

Why did Cyril Ramaphosa get such a hard time?

So, what’s got the locals so fired up? Well, the mining community of Rustenburg is currently fighting for a significant wage increase. Talks with Sibanye Stillwater have stalled, and COSATU members feel that they are not being supported by Ramaphosa and his colleagues in government.

Cyril’s very ‘indirect’ role in the Marikana Massacre ten years ago has also rubbed mineworkers up the wrong way, and he’s not exactly the most popular figure in North West. Man alive, was that evident today…

So COSATU booked the whole stadium for Ramaphosa to address 120 people who are not happy to see him😂😂😂 #Rustenburg pic.twitter.com/FuKYA35bK1

“The PROVJOINTS in North West remain on high alert following the disruption of the May Day rally at the Royal Bafokeng Sport Palace on Sunday afternoon, 1 May 2022. The disruption led to the event ultimately being called off. The situation is currently stable with no reports of injuries, loss of lives or damage to property.”

“The Chairperson of the PROVJOINTS, Lieutenant General Sello Kwena expressed disappointment about the conduct of those behind the disruption and consequent abandonment of the event. The General also cautioned that decisive action would be taken against anyone who breaks the law.”