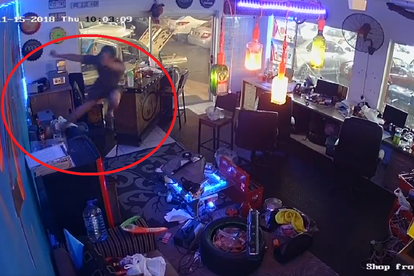 You know a verdict is controversial when it’s got Gerrie Nel questioning the entire criminal justice system in South Africa. The veteran advocate has been left fuming this week, after convicted wife-beater Jaco Swart somehow managed to avoid a jail sentence for his crimes.

Swart, who often refers to himself as ‘hooligan’ on social media, was captured on CCTV beating the living daylights out of his estranged wife Nicoleen. He dished out the savage attacks at his business premises, sometimes in full view of staff.

In what seemed like a fairly open and shut case, the judge stunned the court by sparing Jaco Swart a jail sentence on Tuesday. That’s despite the existence of footage which absolutely had him banged to rights – and we’ve got to warn you, some viewers may find these clips disturbing:

#JacoSwart beat his wife to a pulp. For this he was fined R20k. The court did not get to see this footage. pic.twitter.com/KoEN6QPxsu

A tumultuous day in the courtroom came to a conclusion with a conviction – but there was little else to cheer for the victim. All things considered, Jaco Swart got off lightly…

Gerrie Nel remains incandescent with the final sentencing, too. He has slammed the justice system for merely ‘giving lip-service’ to GBV victims, and questioned its ability to provide proper care for the vulnerable.

“However, we want to sing Nicoleen Swart’s praise because she decided not to be a victim, but to make her voice heard.”