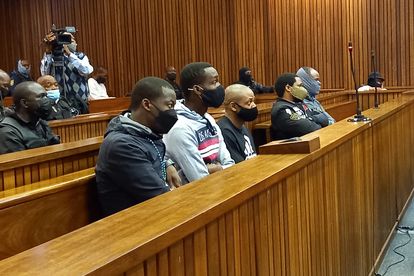 Meyiwa says long before the five accused men were arrested and detained, a number of others were brought in and forced to confess to murdering Senzo.

In an interview with Newzroom Afrika, Sifiso said the leading investigating officer’s aim is not to solve this case but to instead pin the crime on the five accused whom the family says are being used as scapegoats.

Meyiwa said they have been aware that the crime scene was contaminated and police did not do a proper job when processing it.

“In 2019, the investigating officers in the second docket finished their investigation and gave the docket to one of the advocates. Upon perusing the contents, he was adamant they would make an arrest. He was then suspended.”

Meyiwa alleged that high ranking police officials arrived first at the scene and held a meeting, Mosia was then instructed how to process the crime scene and which exhibits to take pictures of.

“What they did is very painful, however, this is how police operate unfortunately. Even though we were doubting the National Prosecuting Authority (NPA) we are now hopeful that the truth will come out based on the cross examination of the defence lawyers,” he said.

Meyiwa further alleged that the NPA was aware of what actually transpired the night Senzo was murdered but they too have been hiding the truth.

“The NPA was aware of the second docket, however, it allowed this trial because they were lied to and told that someone would make a confession that they murdereid Senzo,” Sifiso said.

This week, Adv Teffo’s special plea for a trial within a trial was rejected. Teffo said the Constitutional rights of his clients (accused 1 to 4) were violated. He further alleged that  accused 1 to 2 were assaulted by police to confess and incriminate themselves.

CONTENTS OF SECOND DOCKET IN THE SPOTLIGHT

When the trial resumed on 30 May at the Pretoria High Court, defence lawyer Advocate Malesela Teffo who represents four of the accused revealed that there is a second docket into the murder of Senzo Meyiwa.

Sfiso said they are disappointed by the fact that Teffo’s plea was rejected but they still maintain the fact that the five accused have nothing to do with the case.

ALSO READ: Adv Teffo: Accused were assaulted to confess and incriminate themselves