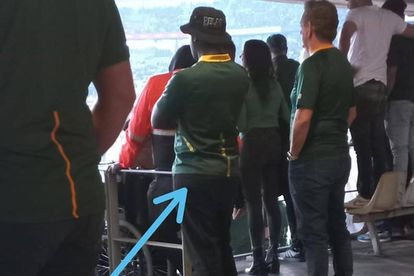 The suspects are now being processed by SAPS, after they tried to take advantage of distracted Springboks fans – Photo: JP Smith / Facebook

The suspects are now being processed by SAPS, after they tried to take advantage of distracted Springboks fans – Photo: JP Smith / Facebook

Two covert criminals thought they could outsmart both Cape Town’s police force AND 53 000 fans inside the DHL Stadium for the Springboks’ swashbuckling 30-14 victory on Saturday. However, much like the Welsh side, these pickpockets were beaten by a better team…

JP Smith is the Mayoral Committee Member for Safety and Security in Cape Town. He revealed earlier this week that vigilant officers were on the prowl during the huge rugby showdown, and they were prepared for opportunistic crooks to try their luck amid the sizeable crowd.

Sure enough, law enforcement officials were alerted to a pair of pickpockets trying to steal from the passionate fans inside the DHL Stadium – who had shelled-out a handsome wedge for a ticket. These individuals were found ‘acting suspiciously’, and subsequently got taken to a holding room.

The men, both in their thirties, were found in possession of SIX cell phones, and R3 500 in cash. They were promptly arrested, and the case is now being processed by SAPS. The cops matched the Springboks, ensuring that they got the right result on Saturday.

“With all major events, criminals will always seek opportunities. For Saturday’s rugby test, with a crowd attendance of over 53 000 spectators, our members were on high alert at the stadium for pickpockets. They observed two individuals operating suspiciously amongst supporters.”

“Both suspects were then escorted to a private location within the DHL Stadium and questioned where a search revealed a total of R3 500 in cash and six different cellphones of which no reasonable explanation could be provided.”

“A 32 year old male and a 33 year old male were placed under arrest for theft and possession of stolen property – and they were then handed over to SAPS for further investigation and prosecution.”