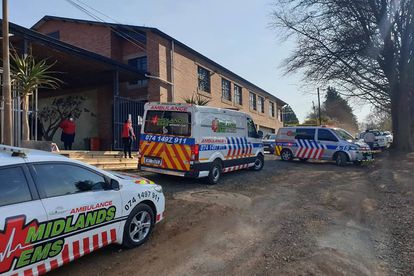 More than a dozen school learners and members of staff were stung by a swarm of bees on Monday, leaving two of the affected children in a ‘critical condition’. The bizarre incident prompted a swift emergency response in Howick, KZN.

Ambulances, life support teams, and even a local beekeeper were called to the facility, as sheer panic set in amongst those being terrorised by the flying insects. As paramedics were administering treatment to the victims, the swarm continued to hover around the area, refusing to relent amid the screams.

“Midlands EMS received multiple calls regarding school children and teachers that had been stung by a swarm of bees in Howick. We immediately dispatched local Advanced Life Support crews and Ambulances.”

“On arrival, it was found that 14 patients had been stung by bees and with the bees still swarming around the patients, crews worked quickly to treat and stabilized the teachers and children. Two children were in a critical condition and required life support treatment, whereas the remaining 12 sustained less serious reactions to the stings.”

According to Midlands EMS, everyone who required treatment was able to receive it on the scene. Life Healthcare is now providing specialist assistance to the pair who suffered adverse reactions to the stings. Meanwhile, the hive that was hosting this swarm of bees has since been ‘dealt with’ by an experienced apiarist.

“All patients were treated on scene by our crews, before being transported to Life Healthcare Hospitals. A local beekeeper was called to the scene to deal with the beehive, which was in a tree outside the school.” | Midlands EMS