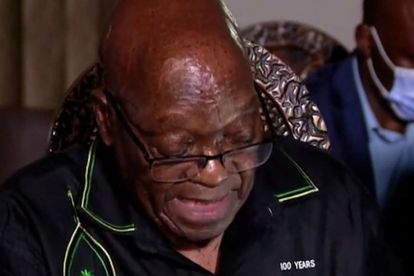 Jacob Zuma may not have quite slithered his way out of this particular jam after all: According to the legal opinion given to the police, they now have until WEDNESDAY to arrest the former president – three days after the initial deadline.

Judicial experts have opened up about the issue on Monday, explaining that ConCourt’s ruling allowed Zuma five days to hand himself over to the authorities. That date has been and gone, as of yesterday. With the former president failing to comply with the directive, SAPS has been instructed to apprehend Msholozi by 7 July – essentially in 48 hours’ time.

Lawson Naidoo, of CASAC, briefly explained the flaw in Zuma’s application, which still allows police to execute a warrant of arrest. Quite simply, a rescission does not work in the same way as an appeal – and the ConCourt’s initial order to imprison uBaba has NOT been suspended. Therefore, the 79-year-old is still at the mercy of law enforcement officials.

“This is not an appeal, and it therefore doesn’t suspend the court order. The application for a rescission does not prevent Mr. Zuma from going to jail, as ordered by the highest court in the land.”

An error of judgment? JZ can still be arrested, despite court application

The legal oversight by Zuma and his team could be seismic. He looked like the cat that got the cream during his addresses to supporters and the media over the weekend. But the grin could be wiped from his face by Wednesday.

Thousands of supporters have posted themselves outside of Nkandla to ‘protect’ the one-time head of state. Any arrest would be fraught with complications, as protesters continue to defy the Level 4 lockdown laws. However, no one person can remain above the law in South Africa, and for arresting officers, all roads will lead to Nkandla in two days’ time.