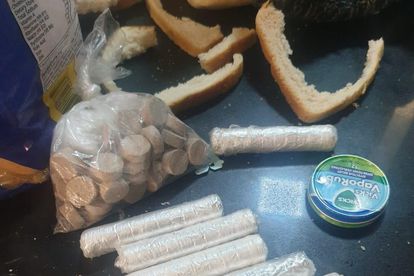 Police acting on a tip off swooped on a man who thought he had the perfect hiding place for his drug stash- inside a loaf of white bread – and arrested him for being in possession of mandrax and crystal meth.

But the police were too quick for the drug suspect and arrested him while he was walking openly with the drugs hidden in the bead in Welkom at the weekend.

The 44-year old suspect is expected to appearing the Welkom Magistrates Court on Monday 5 July to face a charge of being in possession of drugs.

Freestate SAPS regional spokesperson, Colonel Thandi Mbambo, said that members of the Welkom Fying Squad,warrant officers David Mlangeni and Corrie Spies had received information about a man who was in possession of drugs walking near Manny’s Wholesalers in Welkom. The arrest took place at around 8pm on Saturday 3 July, Mbambo said.

“The members acted swiftly and identified the suspect. They approached him and requested to search him,”Mbambo said.

“Whilst busy with the search, 105 Mandrax tablets and 19,5 grams of Crystal Meth with astreet value of R14 400 were found hidden between bread slices,”Mbambo said.