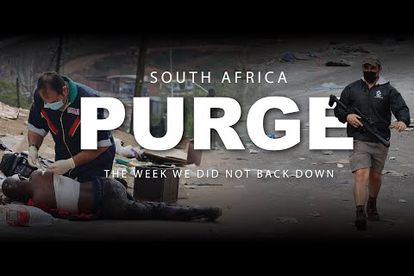 Purge, is a hard-hitting video that shows the harsh reality of what happened last week amid the violent riots and looting in KwaZulu-Natal and Gauteng.

Filmmaker and creative director Anthony George Kirkwood was on the frontline in Durban, filming day and night.

The video is hard to watch with disturbing and graphic scenes. Still, it showcases the harsh, brutal reality of what went down when thousands of so-called former president Jacob Zuma supporters descended on factories, shopping centres, warehouses, and malls, burning, looting, and destroying everything in their path.

“The lack of sleep, camaraderie, dead bodies, being shot at, this was the taste of war. There was no time to think about tomorrow or next week.”

Kirkwood said he would never forget the week he endured on the frontlines last week. He worked alongside paramedics, police, shop owners, community members, and security companies.

“It was a week I think that a lot of people that I met would never forget. I think the best way to describe it – it was a week from hell literally… on the front line.

“The number of dead bodies I saw, the number of shots fired, the amount of looting that happened, the destruction and violence were absolutely appalling.

“No one could train you for what we have witnessed on the frontline. Those on the frontline all knew the presence of each other. It was enough to understand we were not going to back down from this Zuma fraction.”

Kirkwood said that by last week Tuesday, he had made peace with dying for his country.

“I had accepted the point that I would happily die for my country if I had to.”

Kirkwood, aged 31, grew up in Pietermaritzburg and is now living in Durban.

He said last week was a very sad time for South Africa.

“But I think if anything, the evil side of this protest definitely united South Africans, and they cannot take that away from us.”

Kirkwood said the response to his video so far has been incredible.

“I don’t think people realised the extent of the situation. We were in the heart of what was happening in Durban. I witnessed the brunt of it and was able to film it.

ALSO READ: Graça Machel: ‘I cannot sit quietly as the land of Madiba’s birth wages war with itself’

“The beautiful thing about the video is that I didn’t film it for a company or a media house. I filmed it specifically from my perspective on what happened. There was no way of putting an agenda to the video. The story was directly filmed, produced, and told by myself. I experienced it first hand, and that is what I tried to put out there.”

The video has gone viral. Kirkwood said people worldwide have reached out to him since he published the YouTube video on Monday, 19 July 2021.

“I have had messages from all over the world just thanking me for being able to tell the story like no other story has been told and being able to capture it in such a way that it is not just showing you one side. It is showing you all, including how the communities came together.”