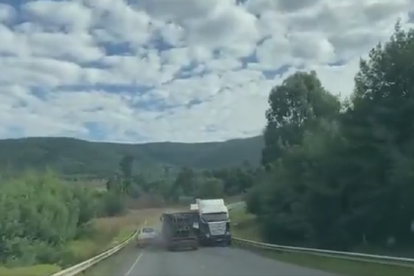 The idiot behind the wheel almost caused several head-on smashes, on 14/05/2022 – Photo: Twitter

The idiot behind the wheel almost caused several head-on smashes, on 14/05/2022 – Photo: Twitter

What a dope. The driver behind the wheel of this truck should hang his head in shame, after almost causing several serious accidents on a highway in Mpumalanga this weekend. Footage of the maniacal manoeuvres have since gone viral.

What are you doing? Mpumalanga trucker loses the plot…

On Saturday morning, the HGV was seen dicing with death, as it drove perilously on the wrong side of the carriageway. The speeding juggernaut squeezed between cars and trucks on either side of the road, even forcing other highway users onto the hard shoulder.

This 90 seconds of madness was captured by a concerned motorist using the same route. They did their best to keep pace with the truck, but due to its unrelenting velocity, those filming had to drop back and keep their distance.

It’s a truly shocking piece of footage – but thankfully, the number plate was captured by the aforementioned motorist. The video has since been referred to local traffic authorities, and Minister of Transport Fikile Mbalula.

The truck can be seen veering from side-to-side, aggressively passing vehicles in the process. The seemingly endless white-knuckle ride sees the lorry narrowly avoid a number of head-on smashes, as other trucks swerve to avoid a major incident.

Meanwhile, a bakkie carrying a trailer has the closest brush of them all with South Africa’s worst driver, and the trucker actually made contact with the law-abiding road user. Thankfully, he was able to keep his wheels on the road. The speedster then disappears into the distance.

Quite frankly, it’s a miracle no-one got seriously hurt here – and the authorities will now work to find this dangerous driver.

😳😳😳😳😳
Registration KCY 465 MP
Retweet 🔁 until he is found with his company pic.twitter.com/CIhPtL8Gys