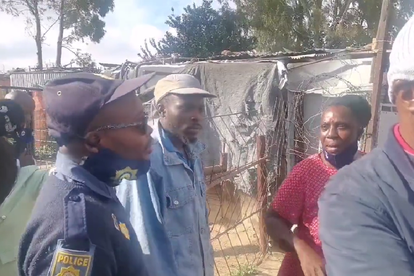 A man from Diepsloot was hassled by cops, following a dispute over his native tongue – Photo: Twitter

A man from Diepsloot was hassled by cops, following a dispute over his native tongue – Photo: Twitter

This is not a great precedent to set. South Africans have reacted angrily to video footage emerging from Diepsloot, after a local Tsonga man was accused of ‘being a foreigner’ by SAPS officers.

Frans Manganyi, a 35-year-old gardener who moved to the settlement just two years ago, was picked out by cops while walking through Diepsloot. When he could not produce his passport, officers questioned where his accent was from. Despite being Tsonga, there was a dispute about the differences in dialect.

SAPS members demanding identity documents from a #Diepsloot community member. It was his Tsonga dialect that got the police suspicious about his citizenship. It was his aunt who convinced the police that he was indeed South African. #SABCNews #OperationDudula pic.twitter.com/cqXJYBtj4U

Manganyi relived his ordeal when speaking to the media on Friday afternoon. He explained why the two law enforcement officials didn’t believe he was a fully-fledged South African.

“I’m a South African, and I am sad because today I almost got arrested because my Tsonga is different from that of the police officer. This is our everyday life. I wake in the morning and try to get an odd job as a gardener. Some days are better than others.”

Mmusi Maimane, the OneSA Movement leader, has also passed comment on these ‘accent checks’. Needless to say, he isn’t best pleased with what he witnessed – and branded the whole exchange as ‘pure tribalism’

“South Africans are now being profiled by accent? This is not what we represent as a nation. The world is watching. SAPS members are now marking dialects. This man had to have his aunt vouch for how Tsonga he is. What would have happened otherwise? After Afrophobia comes tribalism. It does not stop.”