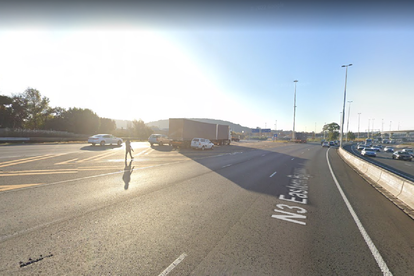 The pedestrian was accidentally mowed down on Tuesday 20 September – Photo: Google Maps

The pedestrian was accidentally mowed down on Tuesday 20 September – Photo: Google Maps

Shocking dashcam footage taken from truck travelling through Gauteng has captured the moment a pedestrian was sent flying by a vehicle in the fast lane – after he foolishly attempted to cross-over both carriages of the N3 highway.

The tragic incident was shared online, horrifying those who have watched it.

The camera attached to the truck shows traffic flowing at a normal pace, before a solitary figure appears in the middle of the road. Vehicles whizz by the pedestrian, on a highway with a maximum speed limit of 120km/h.

Attempting to cross an intersection where the N3 meets the R24 near Bedfordview, the risk-taker gets to the middle-lane and successfully holds up traffic. The truck with the dashcam halts in its tracks, as the man attempts to complete his journey.

Alas, the inevitable happens. After entering the fast lane, he is struck by a bakkie. Both the pedestrian and the motorist failed to spot each other, leading to this devastating collision. Paramedics and emergency crews were called to the scene shortly after 9:14 on 20 September

We are still awaiting an update on the fate of the pedestrian, but things don’t look particularly promising. Footage taken by the dashcam as it leaves the scene of the accident shows the man motionless in the road, lying slumped across the tarmac.

Sadly, amid the carnage, the bakkie that hit the pedestrian is then slammed into by another vehicle travelling at high speed. Both cars come to an unceremonious stop, but the person who decided to risk it all learned the harshest lesson of them all.