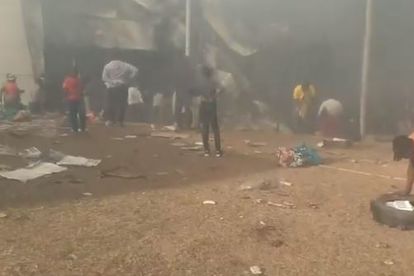 A cold-storage facility was on fire in Hammarsdale in KwaZulu-Natal, as people continue looting on Sunday afternoon.

According to a report by ENCA the eThekwini fire department had to withdraw as the number of looters grew, and things turned violent.

The department reportedly said it was waiting for police intervention before it goes back to put out the fire.

“When we got there, we had some police and the army that were in the facility, we then committed some of our men to do the firefighting, and then the police had to leave, there was a roadblock that was being done on the main road opposite the facility,” said Ntuthuko Mathe from the eThekwini fire department.

Mathe said when the police left, more than 300 or so people reacted hostile towards the firefighters, then decided to retreat.

He said once the situation is under control by the police, the firefighters will return.

This follows a chaotic week in the province.

President Cyril Ramaphose on Friday said over 2,550 people had been arrested in connection with the unrest, and special arrangements are being put in place to ensure that these cases are prioritised.

He furthermore said specialised units of law enforcement agencies are working around the clock to locate and apprehend those responsible for planning and coordinating this violence.

ALSO READ: Watch the devastation and destruction in the aftermath of violent riots

“We will spare no effort in bringing these individuals to justice.”

Since the unrest started, the National Joint Operational and Intelligence Structure has recorded over 118 incidents of public violence, arson, looting and other unrest-related instances.

These incidents were concentrated in Gauteng and KwaZulu-Natal.

ALSO READ: Do not accept dye-stained notes – hundreds of ATM’s destroyed in riots

Since the height of the unrest on Monday and Tuesday, there has been a sharp decline in the number of incidents and calm has returned to most of these areas.

“The destruction of property and theft of goods has cost businesses, consumers, and the country as a whole billion of rands.

“According to preliminary reports compiled by NatJoints, extensive damage has been caused to 161 malls and shopping centres, 11 warehouses, 8 factories and 161 liquor outlets and distributors.”