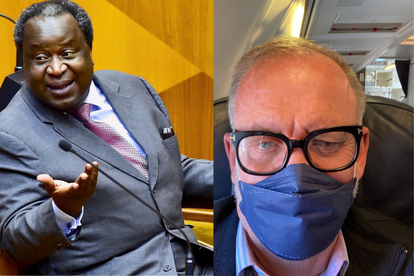 There’s certainly no love lost between former finance minister Tito Mboweni and former uMkhonto Wesizwe Military Veterans’ (MKMVA) spokesperson Carl Niehaus, that’s for sure. It is no secret that both are very vocal on Twitter, which is where a heated exchange took place between them.

Mboweni recently called Niehaus out for his endless tweeting about the politics which unfolded during the ANC Eastern Cape’s Elective Conference this weekend. Niehaus slammed the ANC for its handling of the conference and even highlighted the factionalism plaguing the event.

“The ongoing crisis at the @MyANC #EasternCapeConference is indicative of the factional swamp that the ANC had become. 2 days & credentials shenanigans continue,” he said on Twitter.

ANC Eastern Cape Chairperson Oscar Mabuyane is going up against his former ally Babalo Madikizela. Mabuyane is considered a supporter of ANC President Cyril Ramaphosa. Madikizela has also expressed his allegiance to Ramaphosa, but his inclusion of some of his fiercest opponents on his slate has raised more questions than answers. These include Andile Lungisa, who is vying to become secretary.

Niehaus continued on the social media site: “Policy discussions are not taking place, commissions that are supposed to discuss the dire plight of our people & deal with fundamental Radical Economic Transformation do not sit. Instead we only concentrate on credentials & factional elections. This is the death of ideology”

His endless tweeting seemingly didn’t sit too well with Mboweni, who himself wrote: “Can somebody tell @niehaus_carl to shut the hell up.! Honestly now. This is too much abuse of the ANC by him.”

Well, Niehaus didn’t take it lying down, telling Mboweni he should be more concerned about a letter from NEC member Lindiwe Sisulu to President Cyril Ramaphosa. This is in reference to a recent media report claiming Mboweni and other ANC veterans, including former president Thabo Mbeki, helped form Cope in the lead-up to the 2009 elections.