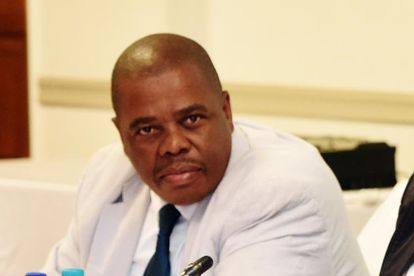 The Health Department has confirmed that Director General Sandile Buthelezi has been placed on precautionary suspension. The suspension comes after Buthelezi was implicated in the R150 million rand Digital Vibes contract scandal.

According to the department, Buthelezi will now have to work to clear his name with the Special Investigating Unit.

Buthelezi took on the DG job in June last year, when the Digital Vibes contract had already been signed off. The problem for Buthelezi comes though, with the fact that he was the accounting official, at the time the contract was approved.
And according to the department, there is no way the Digita Vibes contract could have been successfully signed off, without Buthelezi’s approval.

“The Ministry of Health confirms that Director General: Health, Dr Sandile Buthelezi, has been placed on precautionary suspension until he appears before a disciplinary hearing regarding his role in Digital Vibes saga. Dr Nicholas Crisp, Deputy Director General responsible for National Health Insurance, will continue to act until the hearing process has been concluded.”

What is the Digital Vibes scandal?

Despite first coming into praise for his initial handling of the COVID-19 pandemic, Former Health Minister Zweli Mkhize was later made to walk to plank.
Mkhize resigned from Ramaphosa’s cabinet just hours before last month’s reshuffle.

Digital Vibes was run by two of Mkhize’s former close associates, and was found to have overcharged the department by millions. corruption
The company was first brought on to provide communication expertise on the National Health Insurance, but quickly moved on to COVID-19 messaging.
The SIU found the contract to be highly irregular. It’s also alleged the Mkhize family benefitted handsomely.

Mkhize and his son Dedani, deny that they pocketed millions in dodgy payments.
The SIU has gone to the Special Tribunal, to recoup, some of the millions paid over to Digital Vibes.

Mkhize has vowed to take the SIU’s report on review in court. Will Sandile Buthelezi now do the same?