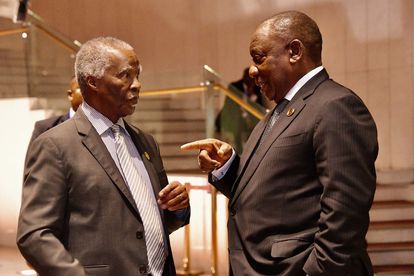 Presidents Cyril Ramaphosa and Thabo Mbeki at the 33rd Ordinary Session of the Assembly of Heads of State and Government at the AU headquarters in Addis Ababa, Ethiopia. [Photo: GCIS]

Presidents Cyril Ramaphosa and Thabo Mbeki at the 33rd Ordinary Session of the Assembly of Heads of State and Government at the AU headquarters in Addis Ababa, Ethiopia. [Photo: GCIS]

Though some will argue the ANC KZN conference was not the right forum for a reply, Ramaphosa has seized the opportunity. The new leadership structures in the province are thought to be part of a pro-Zuma faction, and Cyril faces an uphill battle to keep them onside.

Earlier in the week, Mbeki slammed Ramaphosa for vowing to deliver a ‘social compact’, as outlined during SONA 2022. The promise was meant to feature a number of revolutionary politics that would help address the ills of South African society.

Cyril Ramaphosa said this would be produced ‘within 100 days’ of the address, but that deadline has been comprehensively missed. Many may have forgotten, but Thabo Mbeki decided to grind his axe at a recent public engagement – putting team Cyril on high alert.

The response crafted by Ramaphosa wasn’t exactly grandiose, but it did confront a major talking point. He said that Mbeki’s claims ‘had to be challenged’, given that work IS going on behind the scenes to finalise this much-coveted social compact.

“We have also been involved in finalising a social compact. We should challenge the claim that ‘nothing is being done’ on this front. Since SONA 2022, government has been meeting with various partners to take further measures, in addition to our economic recovery plan.”

Ramaphosa says the notion by former President Thabo Mbeki that nothing has been done on the social compact has to challenged. #ANCKZN pic.twitter.com/76j55MfxHI

‘He was taking the pic’: SA on the ‘Sarafina!’ reunion without Somizi