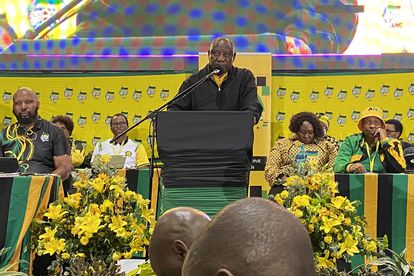 Well, they said Cyril Ramaphosa would be a brave man to go and face the disgruntled ANC KZN conference – and his decision to appear at the function on Sunday evening certainly didn’t please those in attendance.

Ramaphosa greeted by heckles and boos during ANC KZN conference

Huge crowds took to heckling and even BOOING Cyril Ramaphosa, shortly after his arrival. Hundreds of Msholozi-supporting party members serenaded the president with a chorus of ‘Wenzeni’ Zuma’, which translates as ‘what has Zuma done?’

Why is Ramaphosa being rejected in KwaZulu-Natal?

It has been a year since Jacob Zuma was sentenced to serve time in prison, following his deliberate no-shows at the State Capture Inquiry. However, this self-inflicted incarceration created a wedge within the ANC – and was even blamed for the devastating KZN Riots of 2021.

Certain factions in KZN have certainly not forgiven or forgotten those who played a role in Zuma’s spell behind bars – and Cyril Ramaphosa stands accused of orchestrating the whole affair. The ANC leader has rejected these claims, but it looks like minds have been made up in the province:

The ANC in KZN elected new leadership over the weekend, containing a faction of members who have made their opposition to Mr. Ramaphosa clear. Siboniso Duma beat Sihle Zikalala for chairperson ,with 930 votes against 665.