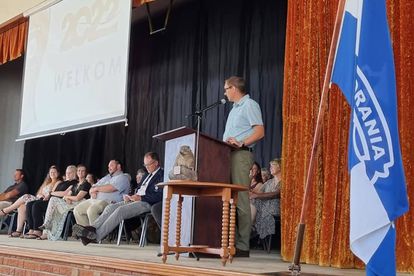 The faculty at the CVO Skool gather for an assembly – Photo: CVO Skool Orania / Facebook

The faculty at the CVO Skool gather for an assembly – Photo: CVO Skool Orania / Facebook

The only secondary school in Orania continues to celebrate its ‘perfect scores’, after it was confirmed that the class of 2021 pulled off a 100% pass rate in this year’s matric results. The whites-only enclave revealed the good news last week, with an official statement that lavished praise upon its top achievers.

Matric results 2021: What is the pass rate in Orania?

The CVO Skool, which had a total of 17 matriculants sitting their exams this year, made the most of its numerical advantage. The Grade 12s can boast a collective 16 A’s, 29 B’s, and multiple distinctions between them.

These matric results were assessed and marked by the IEB, who are in charge of processing examinations held at private and independent schools. It will come as a surprise to no-one that Orania does not toe the government line on education, and the town even has its own specific curriculum for students.

Top results in a tumultuous town

A dozen of the students claimed distinctions, and 14 of them will now head-off to their first choice universities. The three top achievers for the 2021 matric class are Mariska de Wet, Pieter van Zyl and Divan Erasmus.

Orania, of course, endures a controversial existence: The idea of a whites-only town segregated from the rest of South Africa is a problematic concept in the so-called ‘Rainbow Nation’. But locals demand the right to self-determination, and they have been in charge of their own education system for almost three decades.

The official IEB pass rate is 98.39%, meaning the CVO Skool has surpassed the national average with its flawless matric results. An official statement by the school paid tribute to its hard-working pupils – and teachers…